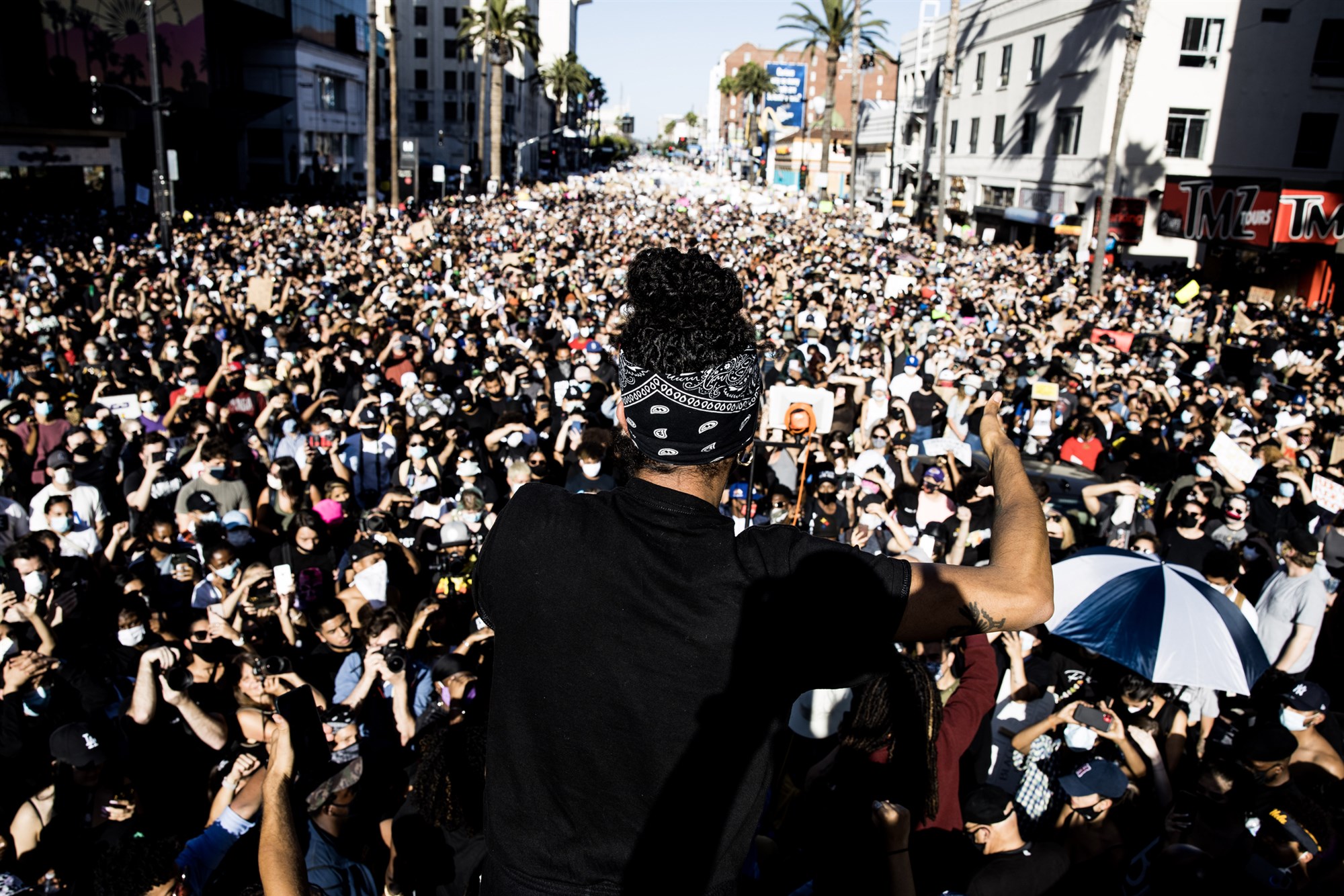 Without a press pass, he was on the frontlines taking photos of the June 7 protests, aware that he was putting himself in front of police and amidst crowds in the middle of a pandemic.

Oliver, producer of “The Perfect Guy,” and co-creator of “Black Love” talks about his widely-shared Hollywood Boulevard photo and what it was like being on the ground.

Tell me about capturing this photo and what that meant to you personally.

I had the good fortune to be on the truck leading the protest, which happened because Kendrick Sampson, co-founder of BLD PWR (one of the two groups that organized the protest), is a friend who was leading the rally from the truck and he was ok with me getting a ride.

Eventually, the truck stopped midway between Highland and Orange on Hollywood Blvd. as the sea of protesters literally ran for as far as the eye could see. Janaya “Future” Khan got on the mic and asked for signs to be lowered and fists raised in a show of solidarity unlike any I’ve ever seen in my life — 50,000-plus strong, all unified. I snapped a few pics from the bed of the truck and realizing the magnitude of what was happening, I climbed from the bed of the truck to the roof and quickly snapped a few from up there.

Why was it important for you as a filmmaker to go out there and document this?

I had to. For me, the idea of having the ability to do something positive in any way, shape or form, I just needed to be there. I wasn’t going there to document it. I just wanted to take my camera.

Some people were capturing it, but a lot was happening that people weren’t seeing in the way it should be captured. You’d see images from Getty or the AP and you’d see that they were looking for shots for the sake of shots. There was so much more to what was happening. People were fighting and potentially putting themselves in harm’s way because there was the risk of catching coronavirus. There’s a strength in that and there’s a beauty in that which needed to be seen.

What was it like being out there as a non-journalist facing the possibility of police brutality?

The people who came before me and were fighting went through so much worse. The idea of something might happen where I’d be hit by a rubber bullet or a baton and I’d be deterred by that, that was never an issue. I owe it to everybody who had fought and died before me.

It was not a choice. I had to be out there. I’m never going to intentionally put my family in harm’s way, but it was a time for me to potentially make a change.

Did you ever feel/experience a moment when you felt were in danger?

While on Ocean Avenue in Santa Monica, the National Guard told a few hundred of us we had two minutes to disperse or we’d all be arrested. We could see from our vantage point they had already started throwing gas on the other side of their barricade and we heard reports there had been shots fired somewhere in Santa Monica. Now couple that with the fact that I have a wife who was already afraid for me to be out because of both Covid-19 and the potential for violence, three boys under the age of 4 at home, and 20 employees I’m responsible to, a lot goes through your head very quickly in those situations. Despite the very real possibility for danger and additional calls to disperse, none of the protesters left — an absolutely beautiful show of support.

How important is it to use our platforms to inspire change?

That said, change doesn’t happen by sitting by and we have a commitment to the next generation as a duty to pay for those who fought, bled, and died to get us to where we are today. I’ve seen and experienced far too many instances of systemic racism in my life, in this business and out of it, to merely watch from the sidelines and if there’s something I can do to make it better but I don’t, then I don’t deserve whatever platform I may have.