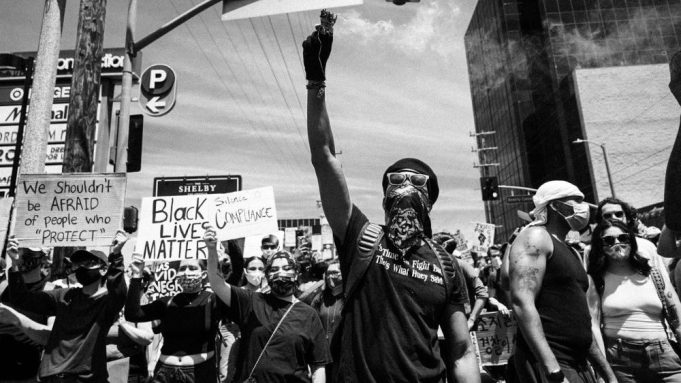 Pan Pacific Park is located in a family-friendly area of Los Angeles, filled with local shops and across the street from Park La Brea known for being home to Angeleno newbies. Right next door to the park is The Grove, an outdoor mall that is adjacent the iconic Original Farmers Market, an L.A. institution that attracts locals and tourists alike. The area is fairly lively on a regular basis, but on May 30, 2020, the park served as a location that was part of a bigger movement for the protection of Black lives.

As the nation and the world reeled from the death of George Floyd as well as Breonna Taylor, Ahmaud Arbery and countless others due to police brutality and racism, thousands gathered in the park that Saturday to peacefully mourn their deaths and fight against racism. I was one of them. It was a call for change to systemic racism and its historical unjust treatment of the Black community.

I have been to one other demonstration at Pan Pacific Park in the past; to put into context, it was for Black Lives Matter. Considering the current landscape and the insurmountable anger, frustration and sadness the Black community was feeling surrounding Floyd’s death, I knew this one was going to be different. I immediately noticed the number of people walking to the park while I was en route, and when I got there I found a huge crowd of people. In fact,  it was the largest crowd I had ever seen there.

There were people of all races, ethnicities, genders and sexual preferences, providing a strong sense of community, support and passion anchored by the mantra of Black Lives Matter as they held signs that paid tribute to Black lives lost because of police brutality. The message was unified across race lines with signs that read “Yellow Peril Supports Black Power” and “White People Do Something.” Many people were giving out bottles of water, face masks and food. It didn’t feel like a protest. It felt like a movement towards progress. There was a feeling of hope undulating throughout the crowd. It felt like the side of a demonstration that people seldom see: a moment of focus, determination and purpose.

Advocate and activist Pastor Stephen “Cue” Jn-Marie was on hand to lead in the crowd in prayer while Jess Calderon, who is of Tongvan descent, acknowledged the indigenous land we stood upon. Actor and activist Kendrick Sampson, founder of BLD PWR, helped drive the ship while Black Live Matters co-founder Patrisse Cullors and BLM-LA’s Melina Abdullah made inspiring speeches in front of the growing crowd and chanted the names of those who have died.

“We’re living in the middle of an uprising,” Cullors said. “Let’s be clear — we are in an uprising for Black life.”

“They have told us we got a right to mourn and be in pain — fuck that shit! We got the right to be angry!” said Abdullah, before pointing out that it wasn’t enough that in Minneapolis one officer was arrested for killing Floyd. “It’s about those four officers who killed George Floyd — it’s about all these officers including the ones that are standing in our midst.”

“We’re here to say this whole system has got to go and we are gonna make it go!” she declared.

Sampson added, “We are here to build power!”

After Amber Riley sang a passionate rendition of Beyonce’s “Freedom,” a sense of solidarity grew. From there, the crowd began to march with a feeling of unity. Abdullah encouraged people to be safe and courageous as they got underway. As we hit the street, we passed The Grove and started to march towards Fairfax Avenue between 3rd Street and Beverly Boulevard, chanting “Defund the police” and “Prosecute killer cops.”

“Standing amongst the thousands of people in the crowd, it was such an inspiring moment of unity. I actually felt hopeful,” Lacy Lew Nguyen Wright, associate director of BLD PWR, told Deadline. “We closed out the march at Fairfax and 3rd. Kendrick [ended the gathering] with the words of Assata Shakur: ‘It is our duty to fight for our freedom. It is our duty to win. We must love each other and support each other. We have nothing to lose but our chains.’ “

Like many others, actress Lilan Bowden marched and was moved by the protest. “There was a clear feeling of care in the crowd and a calmness when we got to 3rd and Fairfax,” she said. “Many protests I’ve been to for different causes, unfortunately, get off message by fringe parties but we were particularly united in the Black Lives Matter message.

I decided to part ways after Fairfax & 3rd — not only because the march had closed, but largely because I was feeling queasy from the heat and felt I would be of no use if I passed out. I also admit that I felt an intensity building.

Actress Jiavani Linayao, who was marching, felt the same way. “The first part was incredible. Everyone came together with this palpable energy of anger and hope and march.” She added: “I could see the police helicopters getting lower and feel the shift. My friends and I felt it would be safer to go when we did. The sense was accurate —  it turned shortly after.”

As we have seen on TV, things started to escalate as the demonstrators stayed in the Fairfax area while a march went on towards Beverly Hills. Wright said the LAPD arrived and began splitting up the crowd in Fairfax. “I firmly believe LAPD came in with the intent to be aggressive. They were never going to try and de-escalate the situation,” she said. “They wanted to scare us and hurt us. People protest because they need their voices to be heard. What LAPD told us was our voices had no place here.”

Wright, who was on the frontline with Sampson, said that individual cops were arguing with protesters, screaming for them to step back. “We refused, but we didn’t fight back or lash out…people had linked arms,” she said. “Then they began swinging their batons at us, and all sense of peace or order was gone. Everyone split off and had to run. That beautiful moment of unity we had was now gone.”

She added, “We had always intended for the day to be peaceful, and I went in with so much hope that it would be…and I genuinely believe the day would’ve been peaceful if LAPD had not shown up.

Sampson, along with many others, were injured by batons and rubber bullets. This includes writer Nathan Ramos-Park.

“At the corner of Fairfax and 3rd we listened to personal stories of the lives affected by this,” he said. “We were rallied by the voices dismantling systemic racism and oppression.” He said things were calm, efficient and joyful as they let medical vehicles came through the crowd.

Much like Wright’s recollection, Ramos-Park noticed a change when police showed up.

“The police came in riot gear, pushing us back, using their batons, firing into a peaceful crowd,” he said. “My friend picked up a rubber bullet and laid it at the feet of an officer while we stood with our hands up.”

When the second wave of police came, things escalated further. Ramos-Park was following orders and staying calm while moving backward. “I was not instigating… and I got shot point-blank by a rubber bullet 3 feet away by a cop,” he said. “He wasn’t scared. He was calm and collected. He took aim and pulled the trigger. I was and still am a peaceful protester.”

Actor Lewis Tan took numerous photos from the event and marched past the Beverly Center and into Beverly Hills. “As we turned on Rodeo Drive there were police standing by the Saint Laurent store with shotguns,” he said. “As we approached them, [one of the] Black Lives Matter leaders [Abdullah] called on a loudspeaker for the crowd to kneel — the crowd almost immediately went silent and knelt.

Tan said organizers made it clear the crowd was not there for violence; as they kneeled, she spoke of community, racism in America, police and the need for justice. “Before she could finish we heard screams from the back of the crowd. We realized it was because the police were shoving and arresting people further down the street because we had all stopped marching,” he said.

He recalls moving down the entire length of Rodeo Drive with thousands of people without a single looter in sight. But when the crowd moved back east towards Melrose Avenue and Fairfax later that night it was a different story.

“The scene was much more chaotic, stores were looted and cars were burning,” he said. “The police in riot gear shot rubber bullets toward crowds on Fairfax as they sat in the middle of the street protesting. Tear gas was set off to disperse them.”

Tan also pointed out there were peaceful protesters trying to calm angry people destroying property. “I am still processing,” he admits.

As am I. I felt peace, hope and solidarity at the start of the day, when BLD PWR and Black Lives Matter inspired the crowd, urging them to make change and fight against a system that has failed marginalized communities — specifically Black lives. It was a call to action.

Unfortunately, that side of the protest is the one rarely seen on TV.

Well into the late night, I heard helicopters hover over and cop cars whizz by near my apartment. I realized the escalated events had migrated further east of Fairfax and Beverly Hills towards La Brea and Melrose. The next morning I woke up and walked on La Brea, a street filled with restaurants and shops. There was graffiti on the sides of buildings — many of which had been boarded up. Damage had been done at a local Trader Joe’s. As I kept walking, there were a handful of looted stores.

When I arrived on Melrose, I saw more damage to businesses but I also saw the community that had showed up and hit the streets to clean, show their support and stand in solidarity. Just as protests are a sign of anger they are also a road to healing — and I saw that the following morning.

I don’t have all the answers as to what we should do, but what I do know is that, as a non-Black person of color, I have the ability to use my voice and stand with the Black community as they fight this fight. It’s not a burden that falls on them. It falls on all of us. Whether you are participating in protests, signing petitions, calling government officials, donating to organizations, holding people accountable for racist actions or having difficult discussions about race, do what’s in your power to create the change you want to see.